How Long Should a Resume Be?

Resume lengths are faddish. In the fifties and early sixties, long resumes—sometimes two or more pages—were the rule, and the resume of a solid, experienced worker might easily have run three to five pages. In the seventies and eighties, when everything about our lives seemed to become more abbreviated (thanks perhaps to the soundbites that made up the evening news), resumes became shorter. A one-page resume was best; at most no one wanted to read more than one-and-a-half pages.

Today, there seem to be no rules on this subject, and the best advice I can give you is to put your ego aside and write a resume of the length that serves you best. In large companies, your resume is usually read by a representative in the human resources (also known as personnel) department, who looks for depth and a certain (but not unreasonable) amount of length. Busy executives, on the other hand, want information in the shortest possible form, and often won’t take the time to read a resume that runs on more than two pages, something to keep in mind when you know your resume is going directly to the head honcho.

As a general rule, two pages is safe; more than that runs the risk of abusing the reader; and one page (unless you are a new graduate) may not give those cautious human resources people enough to work with. 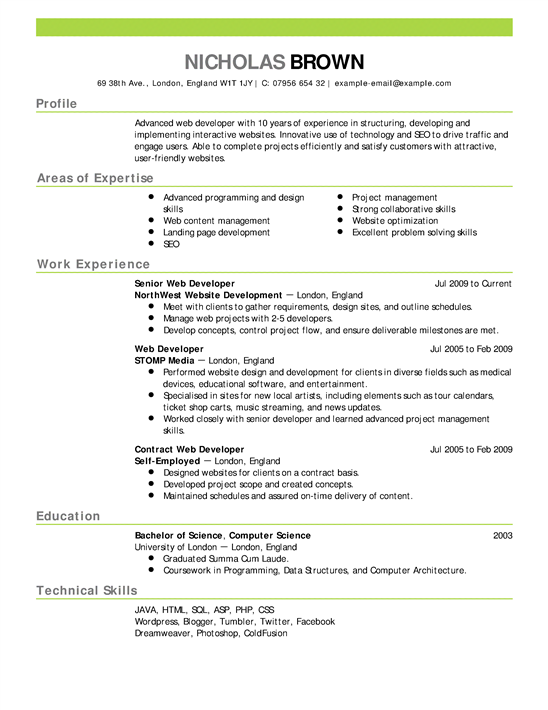 Move Your Ego Off the Page

If you’re having trouble paring your resume down, the problem may be more than your accomplishments. It may be your ego. Often a big ego goes with a lengthy resume—and both can seriously diminish your job opportunities.

If you’ve managed to move your ego off the page, and you’re still having trouble shortening your resume, here are a few hints: 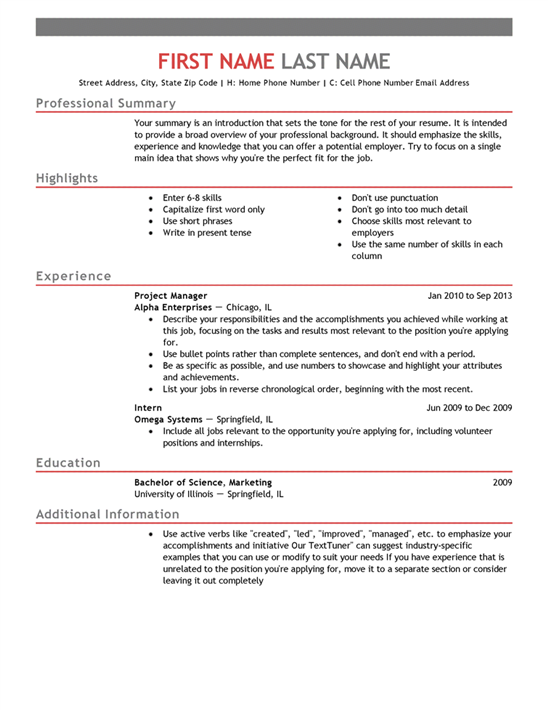 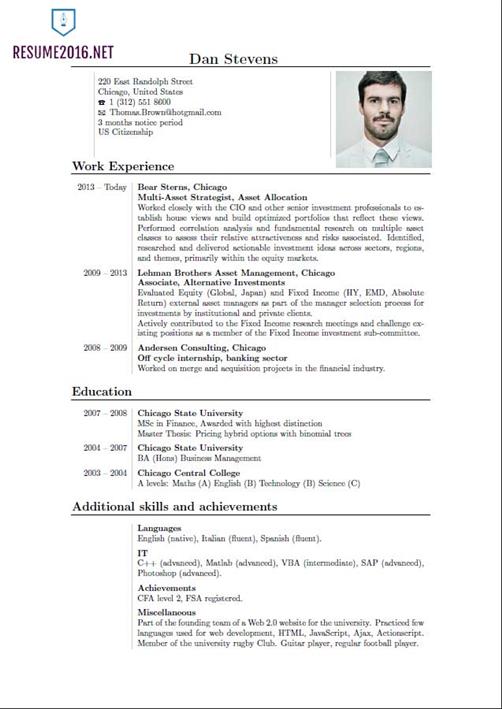 The actual physical appearance of a resume is also important to its overall attractiveness. A clean, consistent, well-organized resume looks as if it comes from a consistent and well-organized mind. Here are a few hints on producing a good_ looking resume:

Study the examples that follow. Which ones look least clut­tered to you? Which resume has the most pleasing appearance?

Resume 1 in picture below is the most pleasing to the eye, be­cause it follows standard guidelines used by graphic design­ers and typesetters to organize type for magazines, books, and other printed materials. The white margins are equal on the top and two sides and slightly larger at the bottom. Identi­cal heads are used to introduce parallel sections of informa­tion. It also makes the most efficient use of space.

Resume 2 won’t hurt the reader’s eyes, but it does waste valuable space that might better be put to use selling your job skills. This is a popular format and actually works fairly well for a one-page resume. If your resume is short, this may be the perfect layout for you.

Resume 3 is cluttered-looking. The margins are too small; the arrangement of type on the page appears to follow no set pattern. Initially, subheads are aligned with the left mar­gin; then they are in the center of the page. All in all, this is a messy-looking resume, better avoided. 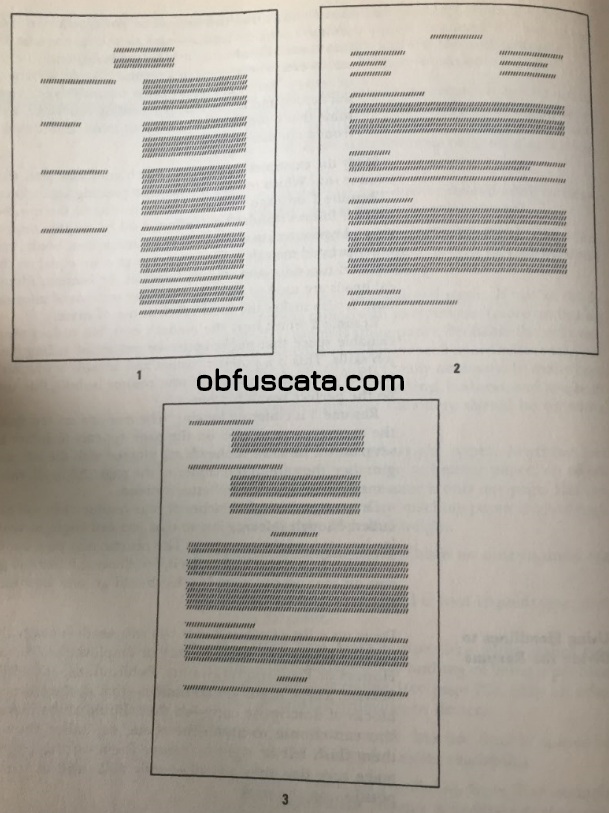 Draw several rough sketches of your resume once you have culled enough information so that you can begin to visual­ize how you might arrange it. The resume may turn out dif­ferently when you actually type it, but drawing it first will give you an idea where copy blocks should go and how much space to allot for everything.

Using Headlines to Divide the Resume

Draw up a list of other heads you will need—usually these include Education, Work History or Employment, Personal, Honors or Professional Honors, Publications, and Military Service. These heads are all similar—that is, they introduce blocks of descriptive copy—so they should all be identical. You can choose to underline them, capitalize them, put them flush left or right or center them on the page. But make sure that they are all exactly alike and in the same position on the page.

Building a Resume with Information Blocks

They should be organized to look as much alike as possible. There will be some problems: for example, the sections on your employment history and your education will contain dates, whereas the personal-information section and the professional-honors section may not. Just remember that the dates must be done in exactly the same way in all sections with dates.

Information blocks may be written in paragraph form as follows:

After a six-month training period, I went to work in the department responsible for purchasing machine parts.  I was promoted to assistant buyer for machine parts in 1988. In 1989, I assumed direction of all buying for the company.

Information blocks may be organized into lists, as follows:

These two examples show several points you need to consider when planning your resume. First, decide whether you want information blocks indented and if so, how much they will be indented. You can also decide what kind of indents you want. You can indent the first line three to five spaces, as follows:

You can use a hanging indent, in which the first line is flush left and the remaining lines are indented, as follows:

Or you can decide not to indent at all and use space only to separate the paragraphs. Whatever you do, be consistent— do exactly the same thing to every paragraph.

Second, decide whether you want to use periods at the end of information blocks. Since complete sentences usually end with periods, the answer is nearly always yes. But if you have several lists that are not complete sentences, you should omit periods. Here is an example of a list where periods would be incorrect:

Study resumes in this book to see how periods and other punctuation are used.

Try to keep information blocks similar in size. If one does run longer than the others, it should be the one describing your most recent position. Detailed descriptions of early jobs should gradually be pared down as you gain more experience.

Or you can use other devices:

The best way to add emphasis within an information block is to underline. Capital letters are too strong to use except as a headline.

But be careful about adding too much emphasis. Many people make that mistake in a resume. Underline only those words or numbers that you truly want to stand out—such as a title or company name—or headline.

The best way to learn about resume formats is to study other resumes and magazines and books to see how the type is handled in them. Gradually, you will develop an eye for what looks pleasing on the printed page and what looks messy. 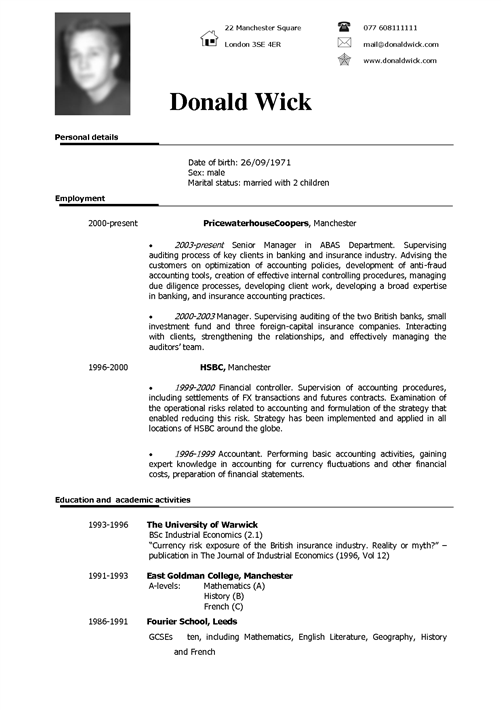